Fox News is reporting several shots have been reported near a Planned Parenthood in Colorado Springs.

On November 12, 2015, Write Into Action reported Curtis and Danielle Kekoa, Northglenn, Colorado, were contacted by the Denver FBI.

Write Into Action has contacted Danielle Kekoa and she stated, “Holy crap! I just told the FBI to expect another attack!”

Kekoa said she told the FBI agent during an interview on November 24th.

Kekoa said, “FBI agent told us we don’t another Dr. Tiller on our hands”. 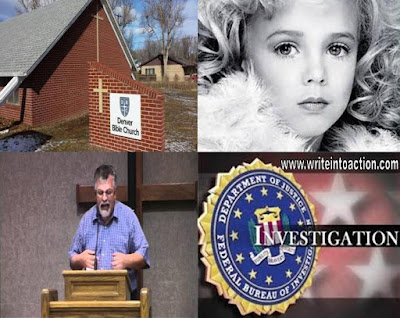 The Kekoa’s believe JonBenet Ramsey was murdered by the leader of DBC, Rev. Bob Enyart. The Kekoa’s describe the church as a “cult” and say Enyart is a “satanic serial killer” involved in many murders including Dylan Redwine.
According to sources, the FBI is investigating “all members of Denver Bible Church and the Right to Life movement”.

Former American Right to Life president, Columbine school shooting parent, and former candidate for Vice President of the United States Brian Rohrbough, said Enyart is “evil” and “perhaps the most dishonest and deceptive man I have ever met in my life. He is a blatant liar and his whole thing is to try to get people into worshipping him”.

“He wants to control everything you (Danielle and Curtis Kekoa) say and do because he’s afraid of something that you’re going to say,” Rohrbough said.
Write Into Action’s journalistic investigation into the JonBenet Ramsey murder is presently focusing on two questions:
Return to Write Into Action Home Page

Additional thoughts from Danielle Kekoa to the FBI:

Today's events at Planned Parenthood in Colorado Springs are a clear act of terror by the 'Right to Life' anti-abortion extremist movement.  "Pastor" Bob Enyart of Denver Bible Church knows that the FBI is investigating him and the criminals in his church—this is a clear sign of the extreme violence and measures they will go to in reaction to being caught.  Remember Enyart is a "Shot-Caller" —whoever pulled the trigger at Planned Parenthood is on orders from him—no doubt about it!

As I said during the interview with the FBI on Tuesday the 24th, "EXPECT IT!" — Who knew an active shooter would only be THREE DAYS LATER?  I do believe that this is only the beginning of many more acts of terror that Bob Enyart has organized.  The sooner he is arrested and charged, the safer our community will be.